Here's wishing one and all a Merry Christmas and a Happy New Year. You may think I'm late in my Christmas wish, however the Christmas season goes until January 6th!

I haven't been stitching much this week. Giving my eyes a much needed break due to a little suffering from eye strain. They feel rested now, so will pick up the stitching again. My first project will most likely be a scissor fob for the Hooked on Exchanging board. I also have three Winter seasonal charts I'd like to get done and of course there's the ever present WIP's. 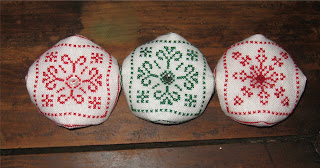 Here's a photo of the latest biscornus I stitched for gifts. I've finally gotten the hang of finishing them. They are so much fun to put together.
I stitched them on 28ct opalescent cashel linen. This has become one of my favorite fabrics of late.

Hope everyone enjoys their weekend. There's some college bowl games on that will capture my attention for the next few days. I should get some quality stitching in!
Posted by Becky K in OK at 4:10 AM 13 comments: 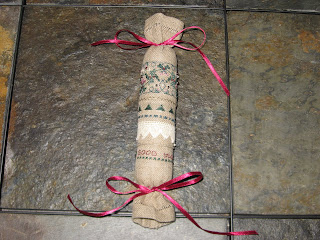 The needleroll is finished and let me say, it was a challenge. I sewed the seam three times, so don't look at the back. I came to the conclusion that it wasn't the stitcher, but the fabric! Hehe. Never could get it straight. I've heard of irregular fabric, but never have encountered it. Anyway, I know my friend will be pleased as she loves whatever I stitch. She's a true friend indeed.

I believe the girls at the Humane Society enjoyed their ornaments. I know I enjoyed stitching them. The lunch was so good, smoked ribs, fried chicken and all the trimmings plus some home-made candy and cookies and one of my favorites, peach cobbler.

The weather was wonderful here. The temps got up to the mid 50's which was quite tolerable. It's supposed to stay that way most of the week. Yipee. No ice or snow in OK's forecast for now.

Have a great stitching evening. I'm heading off to start another biscornu. 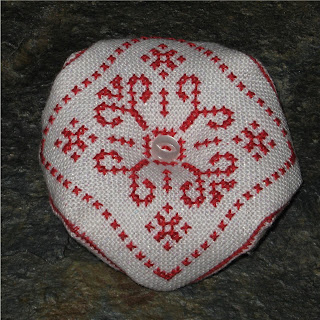 Today is the Humane Society volunteer get-to-gether so I'll be rounding up my ornaments to give to the girls. I have been stitching this weekend with one small finish to share. It's one of the freebie biscornus. I stitched it on 28ct opalescent cashel and used a DMC red. It looks really festive with all the sparkles in it. I've not hit on the right amount of stuffing to use. With more stitching of the little wonders I'm sure I will figure it out.
I had my SB needleroll all ready to stuff. But when I turned it my stitching as not straight. Sooo, I had to rip that all out. Now how that happened is beyond me, because I hand stitch all my seams together. Anyway, that piece is waiting to be re-seamed. I hope to get that done today after my Humane Society stint.
Posted by Becky K in OK at 6:47 AM 7 comments: 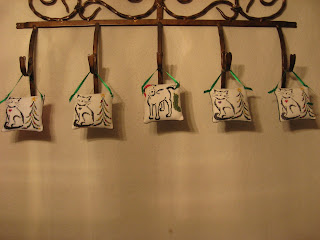 It's not that I haven't been stitching, I just didn't have any photos to show. But today is a different story. I chose not to do any elaborate finishing on the Brittercup ornaments, just a piece of ribbon. Aren't they cute all lined up in a row. I may have a hard time taking them to the Humane Society Monday. Somehow I miscounted by one doggie ornie. I should have stitched two. It will be ok because one of the dog people likes cats also. I'd accept either if I had a choice, so hopefully she won't be too upset. If she really wants a doggie one, I'll glady keep one of the kitties and do another doggie.
Anxiously (not) waiting to see what the weather holds for this weekend. Our area of OK is supposed to get some snow, any where from one to six inches. Okmulgee was much luckier than Tulsa. Our ice melted over night. Not too much damage was done to our trees. Tulsa on the other hand, really lost alot of trees and power has not been restored to over 100,000 homes. Snow on top of this weather will really strain their resolve. This area of OK gets snow from time to time usually less than two to three inches. Any accumulation over that really throws us into a frenzy. Most cities do not have a fleet of snow removal equipment so it takes a while to get the heavy snow removed. It's just safer to stay at home, but many don't have that option. Enough of my soap boxing.
I've about finished the SB needleroll. Just one more area to stitch, and then pulling the threads and doing that stitching. I should be able to get it finished this weekend if I work really hard at it.
This week at the Humane Society was good. We adopted four dogs and two cats, one dog went to German Shepherd rescue and one went into foster care.
Have a great stitching weekend.
Posted by Becky K in OK at 1:32 PM 7 comments: 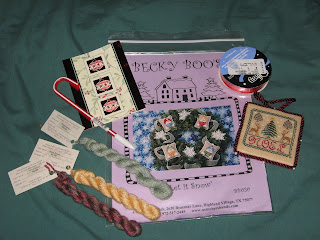 Just look what the postman brought me while I was napping this afternoon. A deare, deer, tree and a Noel. Goldie gifted me with a BRD ornament that was designed for her LNS's Diabetes tree. I am so thrilled to receive this ornament because I have diabetes. She also included a Becky Boo's chart, "Let It Snow". Pretty cool isn't it? There were three skeins of The Thread Gatherer Shepherd's Silk, a spool of red ribbon, a candy cane pen and a Christmas card. I love the exchange. Goldie did such a fantastic stitch, over 1 on 40ct Sand Linen. She used DMC fibers. Goldie really spoiled me. I love it all very much!
An update on little Burney, the shelter dog. He was adopted one hour after his picture was posted on Okmulgee.Petfinder.Com. He is going to a new home in Texas no less. One of our kittens went to Tulsa today. Isn't it amazing that our shelter animals go to such interesting locations?
Posted by Becky K in OK at 5:25 PM 17 comments: 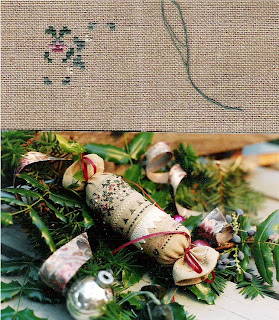 Well, I've stitched and frogged the top area three times. It is sure discouraging when the eyes play tricks on me. I think I've got this start correctly counted though. The piece is a Shepherd's Bush needleroll that I've had for a few years. I started to stitch it last year, but got sidetracked. So, maybe this time it's a go.

Are these two not the cutest strays you have ever seen. Gismo ( the black one) came into the shelter yesterday, Burney today. We are fairly certain neither one will remain in the shelter for long. Both are going to Doggy Doo's tomorrow to get groomed. I can't wait to see how they clean up! 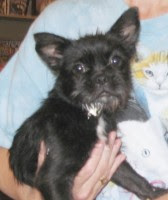 Isn't Burney so cute sitting in front of out little tree? Both are pups and so cuddly.

More stitching to do. Later.

Becky K in OK
Okmulgee, Oklahoma, United States
I'm a retired librarian who loves to cross-stitch and take bus tours. I share my home with a cranky gray tabby, Tobie. When not stitching I'm a part-time church secretary.